The return of volatility

This time last year we highlighted some of the factors that we believed would drive a resurgence of volatility in markets. The most significant force was the global withdrawal of unprecedented central bank stimulus and draining of liquidity from the financial system. One year on, we have witnessed one of the largest spikes in volatility since the GFC, a 10% peak-to-trough sell-off for the S&P 500, routs in high yield credit and a dramatic downturn within emerging markets. As central bankers continue to march down the path of policy normalisation, alongside the heightened spectre of political disruption, we believe volatility is likely to persist in the near term.

Despite some of the sizeable market swings experienced in 2018 thus far, policymakers have shown little sign of shying away from monetary tightening. The Federal Reserve has already delivered two rate hikes this year and is widely expected to deliver at least one more before year end, while a further two are priced in for 2019. Its peers are following suit with the Bank of England and Bank of Canada having ratcheted up rates further this year and the ECB forecast to do the same in 2019. Compounding this global policy tightening is the reduction of central bank balance sheets. The Fed continues to sell down large blocks of its securities each month, while the ECB will halt its purchases of corporate and government bonds this quarter. Together, the annual change in global central bank balance sheets is now forecast to shrink next year, as illustrated in the chart below. 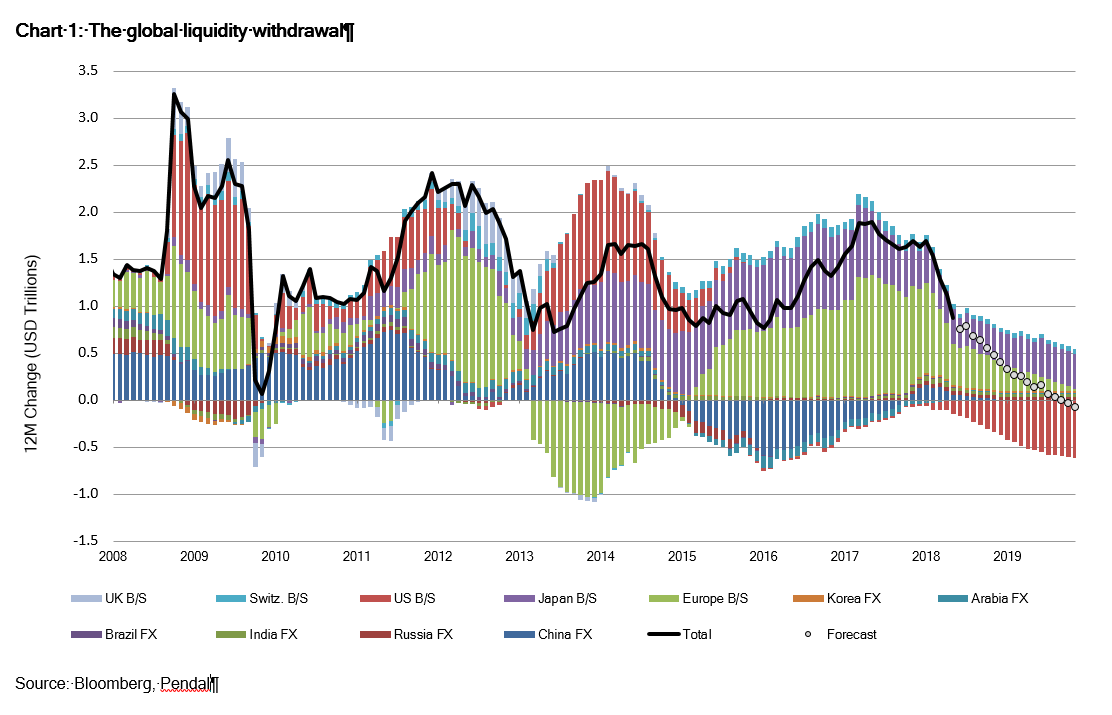 When we started to identify the risks posed by this thematic, we flagged several areas that we believed would be most vulnerable, namely those that had benefited most from the swell of liquidity in prior years and those that had lured investors with the potential for higher returns in an era of low yields. This included high yield credit, pockets of emerging markets, as well as regions particularly susceptible to political disruption. On the reverse side, we believed as investors unwound their higher risk positions, safe-havens like the US Dollar would benefit.

Of course, timing such a reversal in risk sentiment and change in market regime from a long period of calm seas to one of crashing waves can prove difficult.

When we saw the S&P’s 10% correction and 308% VIX spike in February this year, we knew the volatility regime change we had been expecting was underway. Several subsequent episodes of volatility helped reinforce this view and benefited our positioning. One such episode was the well-publicised Italian political turmoil. This reflected a theme we had identified around heightened political risk, particularly in Italy ahead of its general election. We positioned our portfolios accordingly and they subsequently benefited significantly from the large spike in the country’s yields.

Looking forward, we believe Italy’s experience reflects a growing trend across broader Europe away from the prevailing centrist political views, to the extremes. This is likely to feed further fiscal policy uncertainty in the near term and trigger additional bouts of market volatility. The ECB removing stimulus is also effectively pulling the rug out from overvalued asset prices in the region, leaving European credit particularly exposed.

Despite some of the sizeable market swings experienced in 2018 thus far, policymakers have shown little sign of shying away from monetary tightening.

Emerging markets (EM) have been another area of significant volatility and political disruption, with specific pockets more at-risk than others. During the years of low yields, many market participants were tempted into developing economies in their search for higher returns. Now as global stimulus is being withdrawn these positions are being unwound, causing rapid capital outflows and dramatic downturns in their currency and bond markets. Turkey has been a prime case study this year with the Turkish Lira having plunged 42% to the end of August. It is just one example among a growing list of suffering EMs that includes South Africa, Brazil and Argentina.

Their experience is just one symptom of the global liquidity drain and has in turn revealed a number of pain points across markets. If we consider that the ’taper tantrum’ headache of 2013 was driven by the mere slowing of asset purchases, then their reversal should be a very long and painful hangover. With less liquidity and the implicit support under overvalued asset prices being removed, we are likely to see much more extreme reactions going forward. This represents both a risk and an opportunity for investors. It is a risk for investors that are reliant on areas like high yield credit and certain emerging market debt. At the same time, it is an opportunity for investors that are positioned to benefit from the underperformance of those asset classes and have a long volatility bias. In turn, we believe an allocation to a defensive and active fixed interest manager remains a critical part of an investor’s portfolio.

This article has been prepared by Pendal Fund Services Limited (PFSL) ABN 13 161 249 332, AFSL No 431426 and the information contained within is current as at October 15, 2019. It is not to be published, or otherwise made available to any person other than the party to whom it is provided.