Following the trail of industrial robots

• Picking the right industrial companies at appropriate valuations has been challenging but rewarding.

• New technologies further up the production line are driving a resurgence in the Industrial Robotics segment, prompting us to consider if the time is right for investment.

The global Industrials sector provides a highly diverse and fertile ground for selecting companies to invest. This segment features companies across a range of disciplines, ranging from manufacturers of capital goods such as aerospace, heavy machinery and building products through to human services, research and facilities management, and extending to transportation companies in rail, road and airline industries. It is common to see disparities in valuations within the sector through time as markets tend to follow short term trends in narrow segments. As such, we have seen significant performance dispersion across Industrials over recent years. Since the launch of our Concentrated Global Share Fund, returns from the 292 names in the Industrials sector have ranged from +57% (Boeing) to -56% (Capita Plc). Consistent with our discipline towards only buying industry leaders trading below their intrinsic value, we have only invested in seven industrial companies. Two of these investments – Boeing (+57% local currency return) and CSX Corporation (+50.0%, also in local terms) – have been the highest performers within the sector.

While it is disappointing to not have held a few more Industrials amid the sector’s overall strong performance, spectating the rally from the sidelines did reveal a number of gems to consider when sentiment turns and valuations come back to more sensible levels. One such area we have been looking at with deepening interest is robotics/factory automation companies, many of which have experienced de-ratings in excess of 50% in 2018.

So why the interest in Robotics/Factory Automation amidst a sea of red?

The robotics/factory automation space is highly investable, with the annual demand for industrial robots forecast to grow by 14% pa, according to the International Federation of Robotics. This growth is being driven by the rising cost of labour, which has improved the payback period on investments in robotics from five to less than two years. Growth is also being promoted by new industrial applications as well as significant subsidies from various levels of China’s Government. Growth aside, the industry also features a number of companies that hold dominant market share (>50%) and a track-record of sustaining extraordinary margins. These companies are well placed with scale and earnings leverage to invest further in automation. 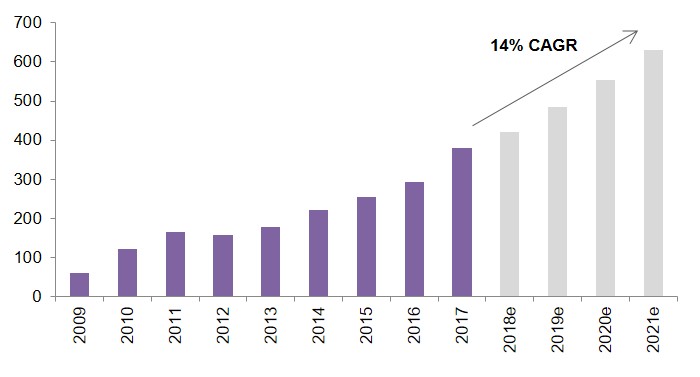 These attractive characteristics coupled with the sector’s valuation de-rating since the start of the year led us to undertake significant research into the sector, which included visiting companies located in Japan, China and the US.

Our meetings revealed very little to dispel our positive impression of the sector and confirmed much of the de-rating has been due to transient concerns over the automotive and semi-conductor capital investment cycle, together with slowing activity due to uncertainties over cross-border trade policies. That said, there was some concern over supply/competition dynamics as new companies emerge in China which can be expected to aggressively roll-out capacity. They seek to offer competitive technology priced around 30% cheaper than the incumbents along with attractive ‘pay when satisfied’ trading terms. The logical conclusion here is profitability for the incumbents is at risk. However, history tells us this isn’t necessarily the case. One such incumbent is Fanuc, a Japan-based global manufacturer of factory automation technologies, which presents an interesting case study in the face of emerging competition.

Fanuc holds a somewhat mystical status amongst investors due to its secretive nature, its charming obsession with the colour yellow and the location of its headquarters in the idyllic forests at the base of Mt Fuji in Japan. These are characteristics many associate with a religious cult rather than a leading industrial company with over 60 years’ experience and renowned for the big yellow robots found in the world’s most advanced car manufacturing facilities. However, the company’s roots are actually not in robots but the somewhat less glamorous field of computer numeric control (CNC) systems (i.e. computers and motors that control machining tools). Fanuc holds a 50% market share globally (70% in Japan) in CNC systems and is a key driver of its 30-40% earnings (EBIT) margins.

Like any other company with a dominant position, Fanuc has met its fair share of challenges. In the 1980s its share in Japan fell to a low of 50% compared to a peak of 80% during the 1970s. Technology played a part in Fanuc’s decline in the 1970s, with the company’s electro-hydraulic stepping motor technology superseded by the faster and operationally simpler DC Servo Motor. Fanuc pulled out all stops to not only catch up but exceed its competition through technology partnerships and aggressive technology implementation, guided by feedback from its customer service network.

The technology threat of the 1970s was followed by a competitive threat with the major machine tool makers boycotting Fanuc for its refusal to allow them to customise the numeric control module. Products from Yaskawa and Mitsubishi were introduced but were eventually marginalised due to end-user preference for Fanuc’s superior aftermarket support.

In both instances, it was Fanuc’s extensive service network that helped protect the company’s market position. This service network goes far beyond being a piece of infrastructure to keep customer equipment in working order; it also serves as a sounding board to help capture customer feedback and direct product development. The network is as valuable today as it was in the 1970s and 1980s as Fanuc face-off against a new generation of competitors and undertakes a sizeable research and development program, amounting to 7% of its sales revenue.

Keeping a close eye on the robots 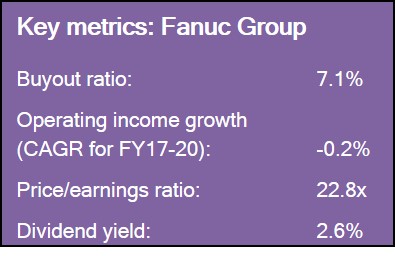 The robotics/factory automation sector is home to a number of companies that harbour significant competitive advantages which facilitate a profitable ride on the industrial automation tailwinds. That said, we don’t currently hold positions in the afore-mentioned names on valuation grounds. Despite the significant valuation de-rating, companies in the robotics/factory automation space remain expensive, offering less than an 8% buy-out yield based on mid-cycle earnings which offers limited upside. A clear valuation discipline within our process is to buy companies with an 8-15% buy-out yield.

By way of comparison, the Fund holds investments in other major industrials such as Boeing, Analog Devices Inc. and Texas Instruments. These companies are industry leaders with less competitive threats. We purchased these names when they were comfortably within our target valuation range and have since performed well. The industrial robotics sector has very real prospects and we are maintaining a watching brief until we see an entry point where the risk/reward balance is more favourable. As investors we are spoilt for choice with 200-plus industrial companies to buy, should Fanuc and its peers fail to meet our hurdles.

This article has been prepared by Pendal Fund Services Limited (PFSL) ABN 13 161 249 332, AFSL No 431426 and the information contained within is current as at November 29, 2018. It is not to be published, or otherwise made available to any person other than the party to whom it is provided.

PFSL is the responsible entity and issuer of units in the Pendal Concentrated Global Share Fund (Fund) ARSN: 613 608 085. A product disclosure statement (PDS) is available for the Fund and can be obtained by calling 1800 813 886 or visiting www.pendalgroup.com. You should obtain and consider the PDS before deciding whether to acquire, continue to hold or dispose of units in the Fund. An investment in the Fund is subject to investment risk, including possible delays in repayment of withdrawal proceeds and loss of income and principal invested.