Engaging via social media has become an essential part of daily lives for people the world over. The deeply entrenched use of smart phones and other mobile devices has superseded the traditional computers experience for an increasingly mobile population who have gone from periodically ‘logging on’ to ‘always on’.

No company is benefiting more from this trend than Facebook. It has been successful in leveraging its platform to facilitate user interactions at scale in a myriad of different ways, at any time of the day. While the ‘always on’ user views, posts, likes and shares, Facebook is working away in the background collecting a share of the value created in the form of advertising.

Today, 93% of its total advertising revenue is generated from mobile which is still growing north of 20% a year.

While Facebook is the type of business we love to own in the Fund, we had been cautious on buying it. Recall our prior discussion on the rationale for details on our view.

Our investment process favours companies with dominant market shares and a growth profile capable of sustaining a competitive advantage over peers. We then look for an opportunity to invest in these companies. This usually occurs after they have experienced a substantial drop in their share price or have had flat earnings for an extended period of time.

As such, our investment in this area thus far has been limited to Alphabet Inc. (Google’s parent entity). We haven’t seen value in most of the other names, that is until recently.

Facebook’s share price underperformed the market from mid-2018 following news that confidentiality of its user data had been compromised. It traded below levels last reached in 2016, prompting a deep dive review of the company. 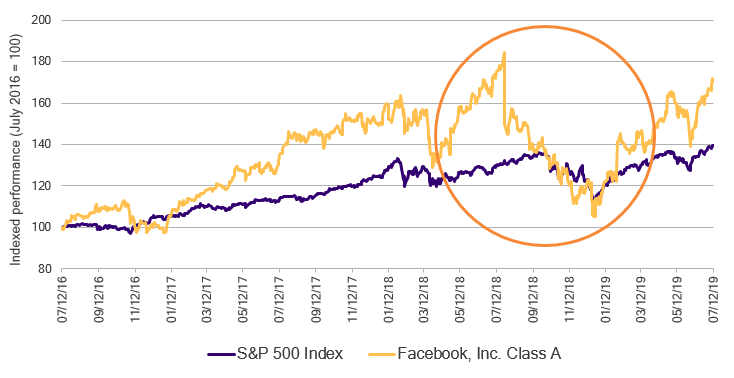 Facebook and Google collectively account for 75% of all global (ex-China) online advertising spend. Such is the powerful combination of digital advertising and a captive, engaged user base. For advertisers the potential return on investment offers a distinct advantage over traditional forms of advertising.

Large, well curated social platforms offer advertisers the ability to have much more bespoke, targeted ad campaigns that can be enhanced and re-channelled through the course of the campaign, thanks to clever analytics that can be extracted to inform success or otherwise of the campaign. Unlike ads on TV, radio or printed materials, the advertiser doesn’t know who is watching TV, who lives in the house, what goods they’re buying online and at what time of day.

Within its stable, Facebook owns and operates Instagram which was acquired in 2012. Within six years Instagram grew to amass one billion active users. Facebook is now in the process of ramping up monetisation of this asset which has become the largest growth driver for the company. The key medium of video presents a richer platform for both creators and advertisers to become more creative with their interactions.

This is similar to the opportunity we see with our investment in Google and its under-monetised Google Maps and YouTube assets.

The key concern for us with owning Facebook in the last two years has been their ability to control and monitor the content on their platform following a series of scandals. With our conservative approach we felt we needed to wait until we had clarity on the eventual new cost base and likely regulatory impact before investing.

Two recent developments have supported a change in our view:

1. Cost growth peaking – The company has had to significantly increased its expenditure on content control in 2018 and 2019. Given the direct impact on its margins and earnings we were happy to wait for signs that cost growth has peaked. In its most recent earnings update, Facebook reduced its expectations for capital expenditure in 2019 by US$1b. This means capital expenditure requirements will no longer continue to erode margins which will provide a base for profitability.

2. Regulatory impact not as bad as feared – Analysis of the company’s first quarter results showed a US$3b expense accrual based on expectations of a fine from the FTC in the range of US$3-5b. From our perspective, we could not forecast this potential outcome with any certainty, but comparing it to similar fines levied against Alphabet in the past couple of years gave us confidence Facebook won’t be penalised at a significantly higher level.

News reports in July indicate a Facebook has reached a settlement with the FTC of US$5b for the privacy breaches, which is within the company’s earlier guidance. The market has responded positively to the news, which was reflective of our premise on this issue.

We believe that the regulatory scrutiny will continue for some time and there will be associated costs. However, we also believe company management have acknowledged the reality of the situation and are driving operational change to reduce such risks and improve profitability.

We have held a favourable view on Facebook’s fundamentals for some time, but its valuation, unquantifiable regulatory risks and uncertainly of its ultimate profitability had precluded an investment. With an improved valuation (cash adjusted price-earnings multiple of 16x and a buyout yield — our preferred whole-of-company valuation measure — of 8%), greater clarity on the aforementioned costs and importantly, management’s actions to ameliorate operations for the platform, we have been able to improve our conviction.

We initiated a position in Facebook for the Fund in April and will look to add to our exposure as we see further evidence of the company sustaining its operating margins and containing costs.