The pace of rising bond yields was material in a historical context. It implied the first rate rise would be brought forward to 2022. Central banks stepped in by the end of last week in a co-ordinated move to stabilise yields.

The challenge facing central banks is not so much how to drive yields lower again — but ensuring the pace of increases remains slow and controlled. The next few weeks will be a key test of their ability to do so.

Reporting season ended up as one of the strongest in years including upgrades for F21 EPS from about 7% to 14%. This was driven by sharper bounces in earnings from resource-related stocks and Covid “winners” like retail.

That said, the latter were some of the worst performers for the month as growing confidence in the vaccine roll-out – coupled with the bond sell-off – dragged on momentum names.

In context of the overall market, the biggest shift in market expectations came from the banks. Expectation for FY21 EPS growth shifted from flat in January to more than 20% by the end of February.

We continue to expect equity markets to remain well supported following this period of consolidation, helped by good in-flows and strong earnings growth.

It is more of the same on the Covid front internationally. Countries rolling out vaccines continue to see falling new cases and hospitalisation rates.

Poor weather weighed a little on the rate of vaccinations. But in recent days the US has been nearing 2.3 million shots a day as the pharmacy network is brought into distribution. The approval of Johnson & Johnson’s vaccine — plus increased production of existing vaccines — has the potential to drive US to more than 3 million shots a day.

The UK’s program is also showing momentum. But European vaccination rates remain far lower, apparently due to greater public scepticism. This is likely to see Europe’s recovery lag the US. This could also act as a dampener on US bond yields. If the spread between European and US bonds widens we could see a shift in capital flows between them.

Bond yields are the current key issue. The bond sell-off is material in a historical context — particularly given its speed. It was exacerbated by a poor auction of US 7-year bonds, with the worst bid-to-cover ratio in ten years.

There are two factors to note:

One paradox was that inflation expectations actually started to roll over. This would be inconsistent with a continued rise in real yields.

The yield curve continued to steepen, which has been supportive for financials in the equity market.

We saw a bigger move in Australian bonds than US. This has taken our yield curve to its steepest in more than 20 years. The RBA increased Quantitative Easing to hold the 3-year yield. This worked, but also reinforced concerns about the 10-year yield.

We have seen a concerted effort by central banks to ease concerns in response to these moves. The issue for countries outside the US is that they are seeing the rise in yields, but do not have the same degree of stimulus as the US. Therefore the rise in rates is a negative for any recovery.

The Fed is the only central bank not to respond so far. But we’ve seen two new speeches placed in the diary: Lael Brainard pre-market open on Monday and Chair Powell on Wednesday. We expect both to be more explicit on not raising rates and not announcing specific bond market intervention yet.

In the near term the current extreme positioning in terms of bond shorts — coupled with Fed jawboning — could see a relief rally in bonds which would support a rotation back to growth.

Beyond this, we think the trend in US 10-year yields towards 2% will remain in pace. The Fed’s aim is not drive to yields down from here, but to make sure the increase is gradual and orderly.

A continued accelerated surge in yields would be an issue for equity markets. But we believe the underlying data will allow the Fed to maintain its current approach, rather than being forced into a dramatic U-turn.

There was strength in commodities as an inflation hedge. Brent crude was up 6.3% and copper 4.3%. If we do see a relief rally in bonds we could see a near-term reversal in commodities.

The rotation from value to growth — when seen via proxies such as US regional banks (value) and Cloud-tech ETFs (growth) — had a move of similar scale to November’s, when the first surge in vaccine optimism occurred. Banks may be due a pause here following strong gains.

Equity fund inflows across the globe have remained very strong. US$414 billion has flowed into equity funds in the past four months, dwarfing anything seen since the GFC. This — along with solid corporate earnings — should help support the market if we see a stabilisation in bonds.

The ratio for companies upgrading guidance by more than 5%+ to downgrading by 5%+ was two-to-one. It was the same for dividends.

Our preference here remains Westpac (WBC) and ANZ (ANZ) which have the greatest leverage to positive trends.

Stock-wise reporting season was very much a story of inflation hedges and less-loved stocks turning the corner while tech, gold and high-performing retailers all got hit.

Crispin Murray is Pendal’s Head of Equities. He has more than 27 years of investment experience and leads one of the largest equities teams in Australia.

Crispin’s Pendal Focus Australian Share Fund has beaten the benchmark in 12 years of its 16-year history (after fees), across a range of market conditions , as this graph shows: 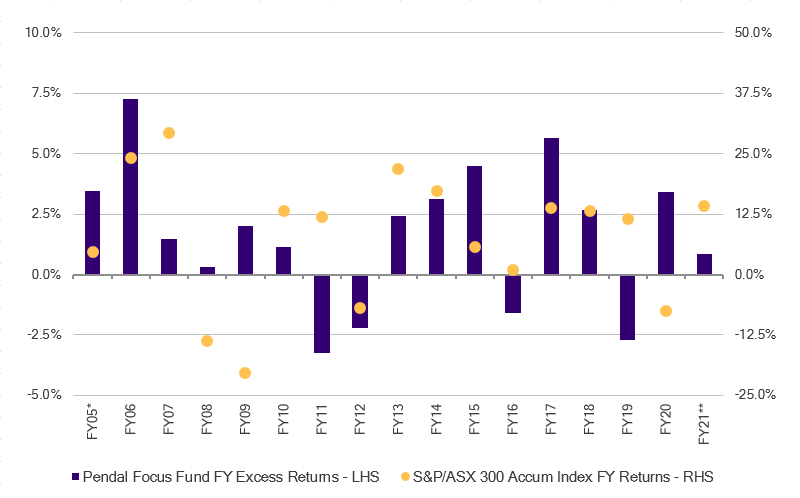 This article has been prepared by Pendal Fund Services Limited (PFSL) ABN 13 161 249 332, AFSL No 431426 and the information contained within is current as at March 01, 2021. It is not to be published, or otherwise made available to any person other than the party to whom it is provided.