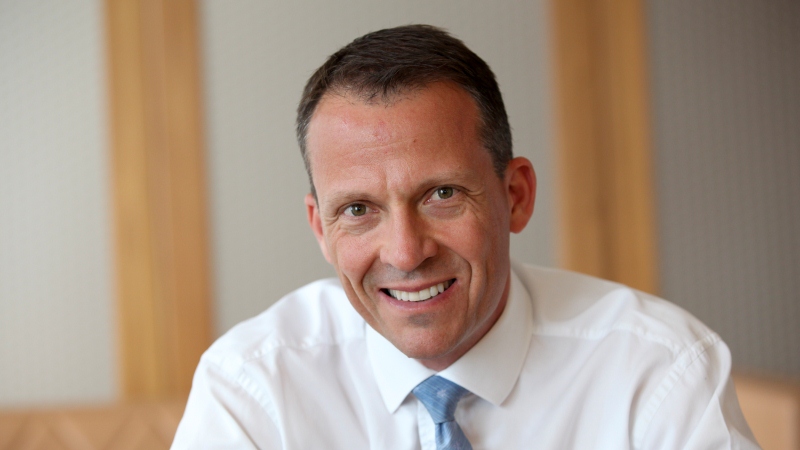 LIKE A horror movie where you get a fright — even though you already know something bad’s about to happen — the markets last week experienced a mini-panic after the first signs of inflation.

We won’t know for a year or so if this inflationary pulse is transitory or more structural. In the interim, debate is likely to ebb and flow between fear and ambivalence.

The key question is: what does it mean for markets and portfolio positioning?

We are still in the camp that markets can rise.

But we think this will be driven by earnings growth rather than valuation expansion — a reversal of the past decade’s trend.

Governments and central banks are focused on generating growth to address social issues such as inequality and to underwrite investment in resilient supply chains and infrastructure for energy transition.

This should support earnings, which can in turn support markets — as long as there is no significant policy tightening.

Without the broad tailwind of valuation re-rating, earnings become a key differentiator of stocks in the market. Picking cyclical winners or improving structural growth stories will be key.

Most sectors sold off. Growth sectors such as Technology (-6.46%) sold off the most, but traditional inflation hedges such as Resources (-1.72%) were also down. This is creating opportunities.

US inflation data came through much stronger than expected. The consumer price index (CPI) was up 3% year-on-year in April and 0.92% ahead of March. A surge in prices is evident in areas related to re-opening such as airline tickets, travel lodging and used cars and trucks.

The CPI is expected to peak next month at +3.6% year-on-year before the base effect starts to moderate.

The market’s reaction was exacerbated by the Fed’s response. A number of Board members quickly characterised the data as transitory and emphasised that policy will remain loose.

The market is adjusting to the risk of inflation after decades without it. Its key question is the credibility of a commitment to keeping rates steady as inflation rises. This will continue to impact the US dollar and bond yields.

We wouldn’t be shocked to see inflation surprising on the upside over the year. It would be a natural outcome from an economy doing better and the increasingly co-ordinated nature of the global recovery as vaccines roll-outs progress.

But we emphasise that this does not have to be negative for equities overall because it’s likely to coincide with better earnings.

Over the medium term wage growth will be the key factor. There is already evidence in the US that tighter labour markets in certain sectors along with the effect of higher unemployment benefits, is leading to wage growth. Amazon and McDonalds have both announced 10% wage increases covering some 600,000 workers.

We do not expect a wage-price spiral to form. There is still a lot of capacity in the economy and structurally deflating factors. But given that governments are looking for higher wages to help address social issues (particularly in lower-income work) this will remain a key macro factor to monitor.

In the US the odds are growing of a bipartisan “traditional” infrastructure bill of $800-900 billion — funded by tax enforcement rather than tax increases to get Republicans over the line.

A bi-partisan bill could be ready by mid-August. This emphasises that there is more stimulus to come, albeit spread over a number of years.

There is some risk to this. Democrats are concerned it may make subsequent, more progressive policy bills harder to pass.

In Australia the federal budget sent an important signal that growth is the goal. For now traditional Liberal policies such as fiscal conservatism are in hibernation. Increased spending on areas such as infrastructure helps the underlying economy and corporate earnings.

There is incremental improvement in global case numbers. The Indian data is difficult to interpret due to measurement challenges. But the rolling over of the daily new positive test rate is a small sign of hope.

Europe continues to progress. There is increasing focus on European re-opening and economic recovery, which is supportive for global cyclicals.

The US is approaching the point where Israel experienced a substantial shift down in new Covid cases.

This is leading to a real shift in re-opening momentum. Surveys suggest a dramatic change in sentiment towards participation in public activities such as movie-going, eating out and air travel.  This is a pre-cursor of the release of pent-up demand.

There are some concerning developments we need to keep an eye on.

The UK is beginning to see the spread of the Indian variant despite a high level of vaccinations (55% vaccinated and 30% with two doses).

The other issue is the effectiveness of vaccines on this variant.

Early signs are positive. In areas of the UK hit by the Indian variant there are fewer cases among over-60s (where the vaccination rate is higher).

This ties into a second area of concern related to the Seychelles. Despite vaccination rates above 70%, cases have surged in this island nation off the African east coast. A third of new cases are among people who have already been vaccinated (using the Sinopharm and Astra Zeneca vaccines).

It is too early to make a call, but this highlights potential issues around the effectiveness of certain vaccines to Covid variants.

This highlights the importance of booster shots and complicates the re-opening of borders.

The inflation data prompted a risk-off move in markets. Equities and commodities fell, while the US dollar held firm.

We have been discussing the notion of market consolidation for a few weeks now. It feels like this is playing out with the crescendo of the inflation print. But the market is proving broadly resilient.

The VIX Volatility Index spiked last week. Though over the past year spikes have come at progressively lower levels with quicker reversions — a positive sign.

The US earnings season has been very strong. Earnings for Q1 were revised up 29% (and FY22 up 8%). This has alleviated pressure on P/E ratios and brought the S&P 500 back towards 20x earnings.

This valuation rating is very much in line with the laxity of monetary conditions.

A key risk to rating is any sign of tighter policy. At this point the Fed’s guidance is for a gradual tightening. But higher market rates, credit or bonds may challenge this. The key point is that a re-rating is unlikely, leaving earnings as the key factor for stocks.

A2 Milk (A2M, -21.2%) was the worst performer in the ASX 100 after management issued yet another earnings downgrade. It feels like the company is getting close to new base in terms of margins and market expectations. We think there need to be signs of material operational improvement to see opportunity emerging.

Xero (XRO, -15.9%) sold off along with other tech names, but the market was also disappointed with its earnings result. EBITDA came in below market expectations as the company invested more in R&D and customer acquisition. Previously, the market has welcomed further investment by tech growth companies, but the mindset has shifted in the current environment. The market no longer assumes incremental benefit to revenue growth.

XRO remains our pick in the sector. Its rating is in line with comparable, cloud-based companies. Our positive thesis is built on a growing appetite among governments and companies for digitally-enabled businesses. Xero continues to grow its subscriber base. We expect average revenue per user to benefit from product development and bolt-on deals enabling provision of new services.

Most other tech names fell on back of the inflation data last week. Afterpay (APT) was down 10.5% and Wisetech (WTC) fell 7.9%.

Chemical company Incitec Pivot (IPL, -10.41%) was among the weakest. It revealed more operating issues at its US ammonia plant, which led to another downgrade. Commodity price increases are ameliorating a lot of the earnings pain.

Crown (CWN, +7.59%) was the best performer as Star (SGP, +3.84%) tabled a bid to rival Blackstone’s, raising some competitive tension in the takeover process.

Treasury Wine Estate (TWE, +6.69%) delivered a well-received strategy update. The key factor was a continued turnaround in the US business as the economy recovers and some oversupply issues start to recede. This is helping offset a hit to its Chinese business from tariffs on Australian wine.

Finally Commonwealth Bank (CBA, -2.83%) rounded out the bank updates. It was a positive quarter, reflecting broad trends seen at the other banks.

Crispin Murray is Pendal’s Head of Equities. He has more than 27 years of investment experience and leads one of the largest equities teams in Australia.

Crispin’s Pendal Focus Australian Share Fund has beaten the benchmark in 12 years of its 16-year history (after fees), across a range of market conditions , as this graph shows: 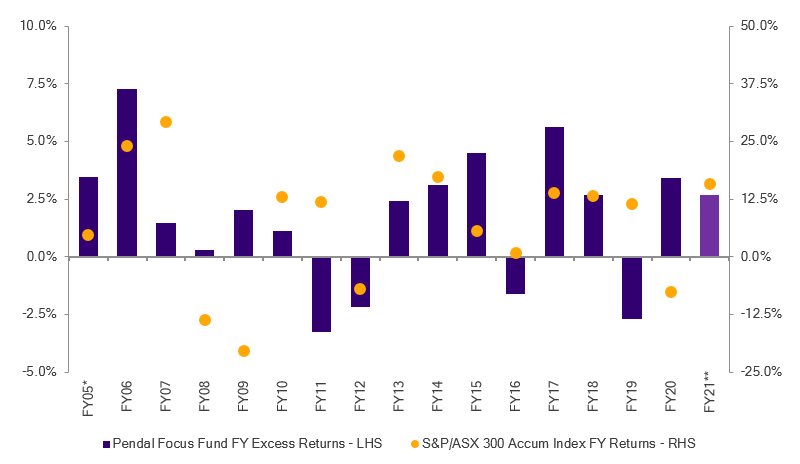 Source: Pendal. Performance is after fees and before taxes. *From 01 Apr 05; **as at 28 Feb 21. Past performance is not a reliable indicator of future performance.

This article has been prepared by Pendal Fund Services Limited (PFSL) ABN 13 161 249 332, AFSL No 431426 and the information contained within is current as at May 7, 2021. It is not to be published, or otherwise made available to any person other than the party to whom it is provided. PFSL is the responsible entity and issuer of units in the Pendal Focus Australian Share Fund (Fund) ARSN: 113 232 812. A product disclosure statement (PDS) is available for the Fund and can be obtained by calling Customer Relations on 1300 346 821 (8am to 6pm Sydney time) or at our website www.pendalgroup.com. You should obtain and consider the PDS before deciding whether to acquire, continue to hold or dispose of units in the Fund. An investment in the Fund is subject to investment risk, including possible delays in repayment of withdrawal proceeds and loss of income and principal invested.