Many reasons are offered up for the recent bond price rises:

All these factors are likely playing a role to some extent. The employment data in the US is particularly important, as an exemplar of a string of economic data that has surprised on the downside.

Though perhaps the most important factor is little-discussed: the demand and supply of Treasury bonds.

In Q1 2020 the US Treasury issued US$342 billion in bonds. Of this the Fed purchased US$254 billion as part of Quantitative Easing (QE). In Q2 Treasury issued only US$70 billion since they had effectively drawn down on the cash balances built in Q1 to fund stimulus.

However the Fed’s QE has continued at the same rate of about US$250 billion for the quarter.

This has effectively engineered a strong bid in the Treasury market, in an environment where many had positioned away from bonds.

The danger could be in reading higher bond prices as a macro signal that inflation concerns have been tamed.

We do not agree.

The technical supply/demand factors may be clouding the signal from bond prices. But the underlying economy remains strong. We see the debate around inflation as still very much alive.

In this vein, US CPI data for May was again stronger than expected. Headline inflation was 5% year-on-year and +0.6% month-on-month. Core inflation was 3.8% and +0.7% respectively.

The market took this in its stride, mainly because price growth was concentrated in transient areas such as air fares, used cars and apparel.

There were less benign components as well.

For example total rent ticked up. This is relevant because it tends to be a longer cycle part of inflation. It had been running at 2%, but is expected to rise to 4% as the surge in house prices feeds into the owner’s equivalent rent part of the equation.

Fast food prices also rose. Although it’s not a big part of the basket, this reflects higher input costs and labour costs passing through to consumers. It’s another thing to keep watching.

Investor and Home Depot co-founder Ken Langone said last week that a number of his businesses were battling the worst labour shortages in 50 years.

The costs of equipment, labour, spare parts and fuel were all rising, he said. His businesses were demonstrating pricing power but it wasn’t having any negative effect on demand.

Against a backdrop of near-zero rates, there is an argument we may not get a natural petering out of activity and easing on pricing pressure to subdued levels before 2024.

This could particularly be the case when factoring pent–up demand, excess savings and wealth increases.

Meanwhile we need to watch investment in capex, which has the potential to surprise on the upside.

Surveys suggest a surge in capex plans in the US. Part of this is tied to investment in clean energy. But companies will also need to spend on capacity to replace Chinese supply of products such as steel and aluminium as Beijing shifts from its role as the world’s provider of energy-intensive products.

In this environment we continue to see appeal in commodities. The sector can benefit if inflation recedes, allowing policy to stay loose and growth strong. Alternatively, it should be a beneficiary if stronger inflation starts to emerge.

Several commodities have already run hard, so it is important to be selective. We still see opportunity here.

This week the Fed meets amid speculation about its approach to tapering QE bond purchases. We suspect some indication that it will start investigating the possibility of tapering, in keeping with recent signals.

The overall environment continues to improve. New daily cases in India have dropped to about 20% of peak levels. Europe and the US remain low. Numbers in Brazil and Asian nations with recent outbreaks appear to be stabilising.

The main concern is spread of the Delta variant in the UK which could be a lead for other countries. This more transmissible version has seen a tripling of cases from the lows and will likely delay the final stage of reopening on June 21. It is raising the threshold for vaccinations to reach herd immunity.

We would not be surprised to see markets move higher through the northern summer.

Information Technology rose 6.9%. Bond-sensitive sectors such as REITs (+2.2%) and Utilities (+2.9%) outperformed to show some signs of life.

This rotation came at the expense of Financials (-1.9%), which led the market in the last six months.

Last week’s move closed the gap in performance between Financials and Technology. But the former is still about 27% ahead in 2021 and there is potential for more.

The potential for more onerous regulation is rising. But a push for cashless casinos, which can help combat money laundering, is complicated by the presence of slot machines in pubs and clubs.

This appears to be a case of the regulator losing patience after long negotiations. The issues do not look as serious as those at Westpac (WBC, -2.2%) and there are currently no civil penalty proceedings. Nevertheless this could lead to a significant step-up in compliance costs.

Altium (ALU, +28.6%) was the best in the ASX 100 last week. The rotation to tech was augmented by a takeover bid from US company Autodesk. This highlights a strong environment for mergers and acquisitions (M&A) amid cheap funding, a strong economic outlook and a market rewarding earnings growth. The bid was rejected.

Afterpay (APT, +9.6%) and other buy-now-pay-later stocks benefited from the latest fund raising by Swedish competitor Klarna. It raised US$639 million from Softbank at a valuation of US$45.6 billion. This is roughly 40x its 2020 revenue.

When Klarna raised capital in March it was valued at US$31 billion. In September 2020 it was $10.3 billion. This highlights heady valuations in the sector and the amount of capital being deployed in a land grab.

Ultimately we think this will impact on margins.

Crispin Murray is Pendal’s Head of Equities. He has more than 27 years of investment experience and leads one of the largest equities teams in Australia. Crispin’s Pendal Focus Australian Share Fund has beaten the benchmark in 12 years of its 16-year history (after fees), across a range of market conditions , as this graph shows: 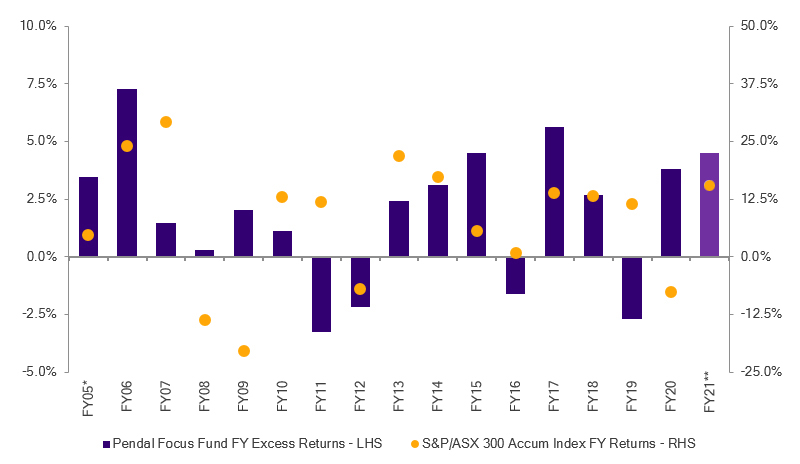 Source: Pendal. Performance is after fees and before taxes. *From 01 Apr 05; **as at 30 Apr 21. Past performance is not a reliable indicator of future performance.

This article has been prepared by Pendal Fund Services Limited (PFSL) ABN 13 161 249 332, AFSL No 431426 and the information contained within is current as at June 15, 2021. It is not to be published, or otherwise made available to any person other than the party to whom it is provided.